PREVIEW
This is it. No more excuses. There is no more room for error, no more room for complacency. Finals are here and winning isn’t for points any more, it’s for mere survival. They say you should play every game as if it were your last, this doesn’t ring more true than the match this week.

The Panthers will face off against the Warriors at ANZ Stadium, Homebush. You don’t have to look too far back to see how these teams went, it was only a fortnight ago, and the results were disastrous, with Penrith succumbing to a 28-18 defeat. Since then the Panthers put in a solid performance against the Storm with the return of James Maloney.

This time the stakes a higher, a teams season will come to an end, and the others side will be one game closer to lifting the trophy.

So this is it, the rest of the season rests in the hands of the 17 men lining up on Saturday. Be sure to get out to ANZ Stadium and make some noise and let them know your behind them. ANZ Stadium is a large place, so make yourself heard Panther fans. gates open at 2:45pm

Also get out to watch the first ever mach to the Holden Women’s Premiership. Roosters v Warriors kicks off at 3:05pm. 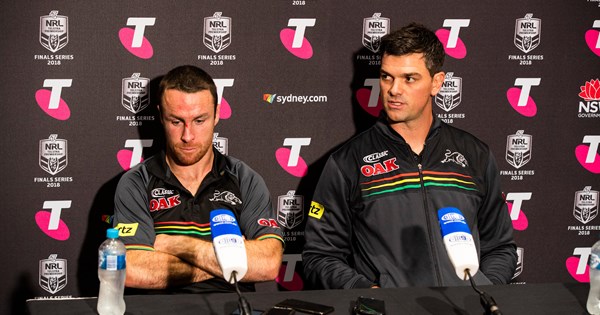 Moylan and Lewis come back to haunt Panthers

The devils Penrith know best have destroyed their grand plans for the game's greatest nursery, with one-time club favourites Matt Moylan and Luke Lewis spearheading a 21-20 Sharks triumph that ends the Panthers season. 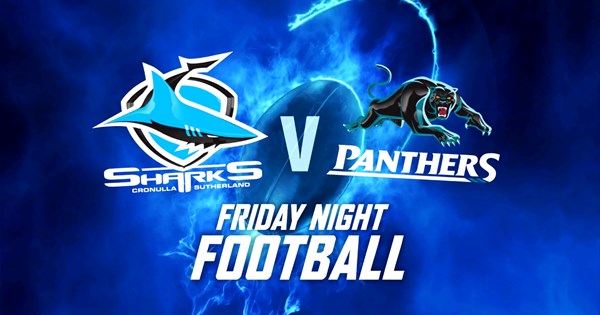 See all the key moments from the heartbreaking defeat at Allianz Stadium. 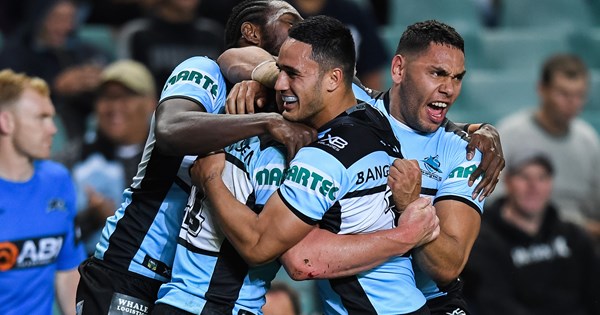 Panthers coach Cameron Ciraldo speaks to the media ahead of the Elimination Final against the Warriors.

Puss, in theory I’d say Warriors, as NZ’s climate is much wetter than our’s. In practice, it depends whose pack turns up. On their day, our pack is the equal of any in the comp. If they turn up today & play with the skill & controlled aggression they exhibited earlier in the year, we’ll be in with a big show of winning.

If they don’t, we’ll be in for a long & miserable afternoon…

Just over an hour to go till I leave and I’m pumped.

Haven’t missed a Sydney based Penrith final since the 91 GF (which I watched on television).

Last time we played warriors at ANZ or in a final was 2003 to win a spot in the GF? Remember it like yesterday.

First time in many years we have both of our first pick halves playing.

Credit where credit is due - Katoa lifted his game last week against Melbourne.

Shut down Johnson and we win this game, together with holding the ball, not rushing passes and kicks, and general discipline.

Hope for a better referee performance than last week, how Melbourne can hide their referee payments from the salary cap auditors amazes me.

Expect and hope for a big one from Maloney, his two week rest was well needed.

Well I haven’t been to one since 91. Particularly remember being sat near a couple of Canberra supporters who though MG was a bit of an animal. We agreed to disagree

do we fizzle in the drizzle or reign supreme?

do we fizzle in the drizzle or reign supreme?

All I know is that in about 5 hours I will either be looking forward to next week or next year.

Confession time. I turned off TV when Warriors scored 2nd try.
This has happened so many times this season, getting flogged, turn off and boys get home.
Same tactics for next 3 weeks should ensure a premiership.
Gus needs to sign me to a decent contract.

Discipline, control , patience. Had to look twice to make sure it was Panthers.
Maloney owned that game in nearly all he did. That tackle, how’d he get up?

reigned supreme. We bring that back next week we’ll frighten the life outta
whoever we line up against.

On the *%#% bus home, and happy as Larry with that result. Play like that second 60minutes and no one can beat us.

What a star is Maloney - controlled the game from go to woa, field goal, kicks for touch, repeat sets, 40:20, field goal, what a finals master he is.

2nd best on field was Cleary, such a deft touch with the ball in hand or foot to set up the attack.

So we have lay the Sharks next week.

Much rather have Maloney than Moylan me thinks…

Well, that looks more like what the Panthers are capable. I was talking to a few fans at the stadium before the game and I was asked to predict the score, I said it really depends on what Panthers side shows up tonight, if they play like they should I would say 26-14, but if the more recent incarnation of the team shows up it could be anywhere from winning by a point or being flogged by 50.

The start of the game looked to be going well. I thought the penalty goal was a good choice, settle the nerves a bit. Then BAM! blindsided by two tries by the Warriors. Oh boy… the old feeling of past rounds was starting to settle in. But then instead of going into our shells, they done something about it. The next 60 minutes was all about frustrating the Warriors in attack and in defense. The Warriors tried their best to fight back, but reached deep down and pulled up… nothing.

I’m not exaggerating here, we play like that for the next 3 week, we won’t be stopped. Bring on the Gummie Sharks!

The key question now is if we can string a performance like that together over the next 3 games.

3 standout games this year so far - Dragons, Melbourne now Warriors. Last 2 were back to back so we can do it, the question is if and will we.

For mine there are 3 standout players in the finals, who have that rare gift of when they are “on”, they can absolutely control and own a game; Smith, Cronk and Maloney. Thankfully we have one of them.

The gummies are going into the game wounded, smarting, and no doubt lacking certain confidence due to some general poor play, and lack of gamesmanship.

If we apply the same approach to future games as we did last night we may well be unstoppable.

great result for the entire team last night and was won on merit despite some dubious ref calls like the Luke hit on Maloney but the record books will show we won.

there was some notable changes to our game and game management and i believe delivered the win to us…those 40/20 attempts and wins, the rolling of the ball in goal for repeat sets, the hard running of our forwards and the committed defence.

our kicking game was masterful turning the big boppers of NZ around time an time again and it had the desired result with forwards getting lazy with some absolute deft set moves like the DWZ break up the centre for Maloney to score.

Perhaps if any criticism was our eagerness to pass the ball to a player in a worse position too early in the game but that can be fixed.

There were plenty of standouts last night but would be unfair to name them as it was a very very good team effort.
We have a very short turnaround and oddly we play at Allianz on Friday night but both teams will have to endure this challenge.

That is too far off but we need to lift again next week…Sharks are tough gritty team who will not leave anything in the dressing sheds and will be up for the fight.

Our forwards will need to be even more dominant to get over a forward pack of hardheads in the Sharks…and that will allow Maloney/Cleary to have the room to weave their magic.

Time to dream boys and believe in what you can do.

From Weds, I’ll be in Uganda til Sept 30th & doubt I’ll be able to watch the finals, so fingers crossed we’re still alive & in the GF when I get back.

Very different game next week, the Sharks have had our measure this year & won’t allow us to dominate them like the Warriors did.

Fingers crossed we can get the job done. I would love nothing more than to ruin Matt Moylan’s year by bundling his team out of the finals next week!

The key question now is if we can string a performance like that together over the next 3 games.

It the reality that the team will have to live with. 4 games to win the whole thing. 4 of the toughest games they have to play this year. One game is done and dusted.

None of these games will be easy, every game we play will result in the end of a teams run, it all or nothing at this point. Looking at the performance tonight, if Penrith keep that up for the rest of the finals series you will be able to day this “They will be hard to stop”.

Can someone enlighten me as to what happened with the Luke illegal tackle on Maloney? Where I was sitting the prevailing opinion was that Luke would be luck to stay on the field. Then we look up and Penrith has been penalised. Clearly we all missed something. WTF.