PREVIEW
This week sees the return of origin players James Maloney, Nathan Cleary and Tyrone Peachey, as well as the return of Josh Mansour and Dallin Watene-Zelezniak from injury. One of the most complete sides stating in several rounds. They lineup against a in-form Broncos side at home, looking to make a place for themselves in the top 8, while Penrith will be looking to enter the Top 4 with a solid performance. This game is broadcast live both on Channel 9 (FTA) and Fox League 502 (Foxtel). 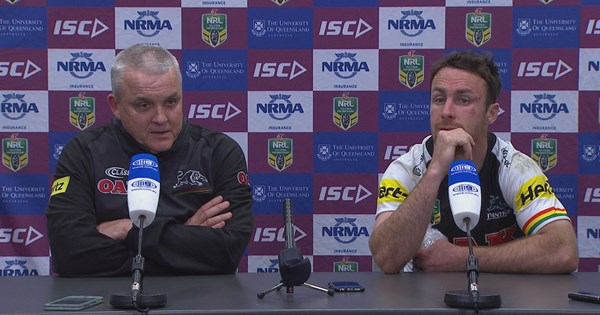 Brisbane blew Penrith off the park 50-18 and rebooted their top-four hopes in the process on a night where Tevita Pangai jnr terrorised and the Broncos backline entertained with flair and guile. 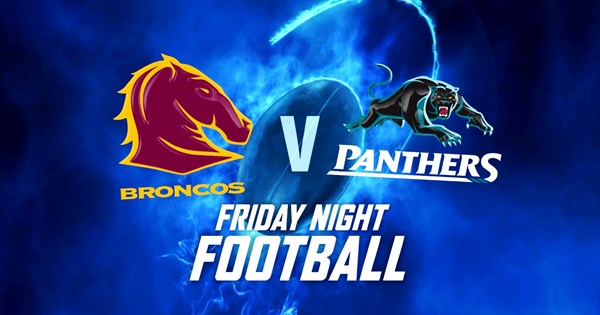 See all the key moments from the Panthers clash in Brisbane. 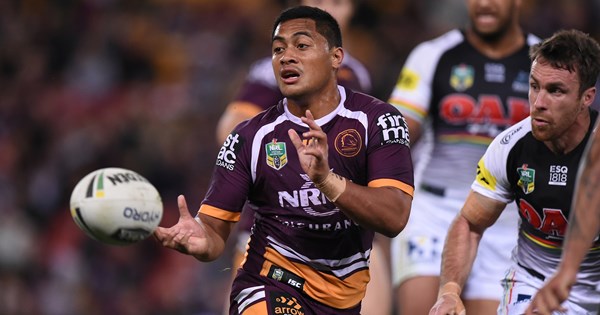 Hopefully a better game than the rubbish Parramatta and Canterbury dished up last night. I think it was one of the Parra plays that the commentator called U6’s stuff; personally I didn’t think it was that good.

Find it hard to believe anyone would whatch the slimeys lol

This should be an interesting game.

I don’t know what the stats say, but for the last 15 years or so we seem to have the wood on Brisbane.

Welcome back sauce! Hope he is fit and rearing to go, he was in career best form prior to his horrible injury.

Hope our halves come out firing after their rest.

Can billy put on another sterling performance week in week out for 80 mins? He certainly deserved his contract upgrade. Time will tell.

I’m likely wrong, but I hope we get the result, and I’m mildly confident.

My prediction of the score was wrong.

Chrieghton is not a first grader.

It may only be half time, but the way this is going I don’t know if I will post again till tomorrow.

You can’t afford to gift any team 4 tries if you want to win. The Pangai Jr try where he looked held didn’t help either. We have a lot of work to do if we want to compete in the finals.

The test will be to see how quickly and completely we can get out of it.

A spot in the finals isn’t nailed down yet. Mutley said it - we have a lot of work to do, quickly!

Terrible. Nothing was going to plan. The referee was terrible (not why we lost though), and the back seem switched off. The shuffling at the back and having 2 players left on the bench didn’t help, but this was a game to forget.

Hopefully it serves the players and coach as a rude awakening to what is needed on the road to the finals.

Chrieghton is not a first grader.

I found Katoa to be quite frustrating tonight in attack as well, he was spending to much time looking left and right from dummy half, rushed his delivery from dummy half, and was making silly mistakes. Make me wish Wallace was still out there.

The bubbles burst. 4 losses the last 5 games and some of those
fairly significant. Last night was a shellacking and shouldn’t
happen pre or post SOO. They wanna pull their collective
finger out or miss the semi’s all together. There’s a few ego’s
there that need grounding immediately.

Couldn’t agree more about Katoa, I thought he got found out a number of times last night and was largely ineffective. He has a bad habit of stepping sideways prior to passing the ball rather than stepping forward and drawing the defense.

In hindsight, a bit of a hard game to assess why we played so poorly. We certainly kept trying right up to the final whistle.

I thought the forwards played well, Tahmou, Merrin, Yeo and Billy especially. Maybe JFH needs to go back to his old hair style to get his mojo back?

The halves and outside backs are where we lost the game, in fact aside from our two centers, our backs where either not up to the task or having shockers.

I’ve been saying for a few weeks that our inexperienced wingers were being found out, now I know options are limited, and thankfully Sauce has returned, but surely it’s time for a rethink and some changes made.

After watching last nights game I regret suggesting Leui could play fullback (I’m sure he’s played there in regies or u20s).

It wasn’t so much the stifled attach by the backs, but there very poor defensive positioning. Time and time again we were caught out of position, a complete contrast to earlier this year.

Can someone tell Maloney to not run out of the line in defense? It’s a flaw in his game and cost us last night.

One highlight was CHN chasing that bronco who pulled his hair.

In all I think it has got the stage where changes are required. Maybe DWZ to wing and young Aitkins to fullback. Egan to hooker.

Don’t know what to do about jimmy though? Hope he will just brush it off and put on a blinder next week?

I remain eternally optimistic (I wouldn’t be a panther fan otherwise), but unless we turn this ship around fast, this could be another very disappointing season.

Ironically unlike others where we have shown promise early, to be cruelly denied by injury, this year it’s getting the injured back is when we are falling apart.

Certainly agree about Egan to hooker. As regards Jimmy, he will win you games and he will lose you games so take your choice. I also think he stifles Cleary to a certain extent.

If we are on our game we can win the next 4 games (Manly, Canberra, Gold Coast, Newcastle) and cement a spot in the finals. The team should use these games to get back into that early season rhythm interrupted by rep duties, I feel the slump can be directly attributed to the disruption to rep season, and the closer to the finals we get the more they should return to form.

Its up to the team to prove me right (or wrong).

Agree 100%. Realitically, no team can go through the nrl season without a slump. The problems the Origin period have caused clubs like the Storm & Broncos over the years have been well documented.

Our form this year meant we had 4 players in Origin, on top of an already massive injury toll. A slump in form was a matter of “when”, not “if.”

The silver lining is that we have debuted 6 first graders this year, we have 4 games against bottom 8 sides to get our mojo back and we are getting players back from injury. I’m hopeful, and quietly confident, we can turn things around and get the season back on track.

Manly at Lottoland will be a good test.

It is clear evidence to the NRL referees that momentum is a game killer. I have no issue with the result as the 2 points deserved to go to the Broncos and I’m glad it was a flogging on the scoreboard because Hook can use that as ammunition, BUT the momentum i speak of is, we (Crichton) coughed up the pill when the ascendancy was in the balance early, advantage Broncos who scored, but from there, we saw some crucial decisions and penalties that could be at best 50/50’s that went to the Broncos. IMO that exaccerbated the situation which led to dumb decisions on our part and in turn soft tries being scored.

That try where every man and his dog said he was held up was again our issue, if we (Luai) doesn’t come over the top of an already (momentum halted) tackled player, the ref would not have allowed him to play on, the fact he virtually missed caused the extra movement and in turn old mate reaching out. I’ve seen players on half way called held faster than what we saw on our line…

Anyway, RCG will return soon and our dramas will subside…

It is clear evidence to the NRL referees that momentum is a game killer.

This is particularly bad for a club such as Penrith, who are driven primarily by momentum. This favors teams who win mostly by slowing the game down and time wasting. I hope this isn’t the image the NRL are looking for, makes for some super boring football.

I don’t want to see another game like the match I saw when we played Canberra. The amount of stop time just made the game unbearable to watch, and I was in the crowd at the game.

Steve, I didn’t go to the Canberra game thankfully, because if I did I wouldn’t travel to another game. To a degree Ricky Stuart is right, who wants to watch that crap being dished up.

Refer to my post in ‘refereeing’ re slowing the play - The game needs a full review with passionate league experts communicating what the game should look like. I say experts with the intention of no current coach/player/manager involvement. Anyone with an agenda will try and push that barrow and that is why we are where we are today. Vote 1 - Vossy, that corner post change is the greatest thing since removing the stiff arm.

Re AlbertRoss post …
Maloney takes risks, Cleary don’t.
Not sure Maloney stifles Cleary, just think Cleary has
not yet learn’t to express himself. Ultimately I think
Luai and Cleary have the potential to create havoc
more so than the current pairing.

I’m not sure that (Cleary/Luai) would be the way to go either Puss, it’s great that these blokes play what they see but I believe Cleary has been most effective when playing like Maloney, i.e. with a structure in mind but playing (dare I say it) eyes up. We have been seeing this go out of Cleary’s game since Origin, he is passing early, not drawing the defense or advertising his run allowing the defense to adjust early…and from that Maloney becomes the “maker or breaker” of our play and he is being found out and or targeted.

The halves need to compliment each other, I think Cleary may have a few tender spots that are keeping him from being him, which to a degree is understandable but at the same time inneffective.