PREVIEW
Regan Campbell-Gillard is expected to return this weekend, as the race to the finals begins to heat up. With 5 matches remaining the Panthers will need to get ready to play finals football. With the get out of jail win against the Sea Eagles it should serve as a wake up call, a performance like this in the finals will see a untimely exit. Coach Griffin has decided to keep Tyrone Peachey at fullback after having a good showing in what could be described as a poor team performance.

The Raiders should not be taken lightly as they are still a mathematical change of a finals appearance and are looking to disrupt teams in the Top Eight. A loss for the Raiders on Sunday will all but destroy a chance of playing finals footy. The Panthers will need a good showing to repair the damage to their confidence and their “for and against”.

Get out to the Stadium and put your support behind the team in one of their last two home games for the season. 3 grades will be turning out at Panthers Stadium on a warm sunny day, good time to spend out with friends and family. 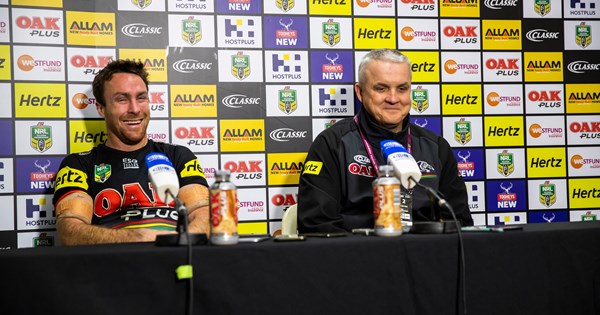 Penrith coach Anthony Griffin and captain James Maloney address the media after their 40-31 win over Canberra. 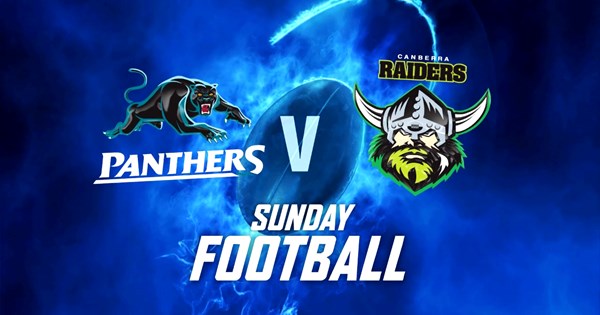 See all the key moments from the Panthers victory over the Raiders. 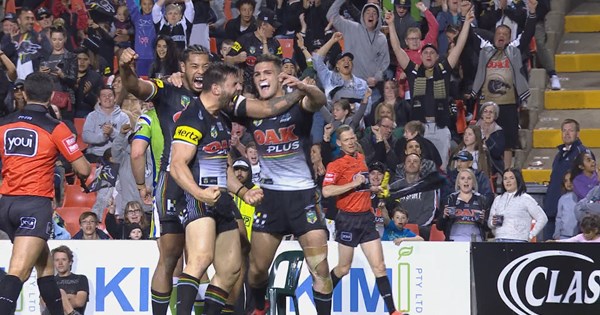 Penrith have come from behind for the second week in a row beating Canberra 40-31 at Panthers Stadium.

well we used our ‘get out of jail free’ card last week
and with semi’s fast approaching need to get our
act together. This is a most important match for
Panthers. Have we got what it takes?

The panther halves played well back from the defensive line last week, giving the defence a real good look at what play was coming, it is ok to give early ball when the outside players have some room to move but if you want to keep the defence in two minds you have to keep them in two minds you have to look like you’re gonna kick run or Lastly pass, last week they looked up – took a couple strides and threw it. Basically their timing was out big time!! It wasn’t till the end of the game that they actually ran at the line, especially Maloney.
Also last week the defensive line wasn’t fast and was a dogs breakfast. Some were fast, some slow. Just before Origin everything was as it should be. Hopefully they can find that form fast and hopefully it will start today against Canberra.
I thought Peachey was quiet and DWZ added a lot more to the overall strike of the Panthers when at fullback. And he had a crap game on the wing to boot, he overran the ball like he always does when on the wing.
JFH move also didn’t work. And May ads a lot coming off the bench, good move to retain him, my opinion.

I don’t if I copied other peoples posts. I haven’t been on this site since it changed. Today I finally reregistered to this new format. It looks like it’s been bought by the Panthers, It looks a lot more official.

“have we got what it takes?” - far from convincing.

What was Sam Williams thinking slotting through that field goal with 12 minutes left on the clock?

To me that pretty much says “That’s all we got left in us, but we think it’s enough to win”… shortly after that came a onslaught of point that guaranteed an end to their season.

I’ll take the 2 points, but that was very ordinary. We didn’t win the game, Raiders lost it. I think that is a little unkind.

I think we won the game even if the Raiders would be disappointed giving up a big lead.

I agree - we are putting ourselves under the pump but still getting away with the points.
If the defensive effort that was put in against the Dragons can become a regular event, than we will be a formidable opponent.
TN67

I was alot more comfortable with yesterdays deficit than last week, it was pretty obvious the big boppers from the ‘faiders’ were going to do it tough against our young energetic team. Plus the fact Sticky told them at half time we would come back at them, just stifled their mindsets.

I thought the Faiders put the cue in the rack when they kicked the field goal. Granted, we can do that to pretty much anyone in the back end of a game when we are on.