PREVIEW
Coach Cameron Ciraldo has made some big changes after a humiliating loss to the Knights last week. Dallin Watene-Zelezniak returns to the Fullback role with Tyrone Peachey pairing with Nathan Cleary in the halves. Christian Crichton returns to first grade on the wing, with Wayde Egan promoted to the starting squad in Hooker at the expense of Sione Katoa. Trent Merrin returns the starting prop with James Tamou returning to the bench. James Fisher-Harris also returns from an injury.

The changes reflect the side that had success during the mid-season, essentially returning to what works. Penrith are in position to finish anywhere from the Minor Premiership to rounding out the top 8. A strong performance against the Warriors and Storm will guarantee a top 4 finish.

With only 2 weeks remaining in the regular season, Penrith need to show the competition what it’s capable of with solid performances. Time is running out fast and there is no room for complacency. 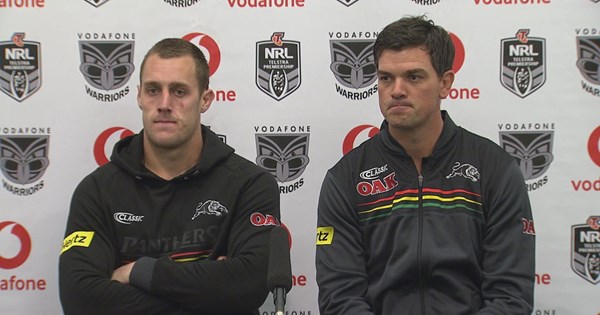 Panthers punished by the Warriors

The Panthers fell to a disappointing 36-16 loss to top 8 rivals New Zealand Warriors at Mt Smart Stadium on Friday.

The Warriors can start planning for semi-final football after scoring a 36-16 win over the Penrith Panthers in Auckland on Friday night. 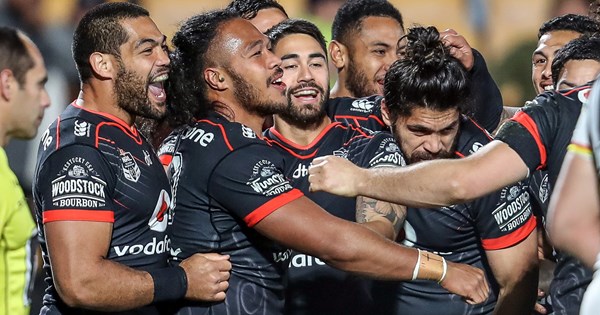 Can we have another ball, the Warriors aren’t sharing it?

Mansour is a huge liability in defence. Young hooker overawed.
Forwards outmuscled. Peachey no 5/8. Whare injured. Kick happy.
Not many positives to take out if this game, 'cept … no, nothing!

They should all surrender their visas.

One of Peachey’s worst games, but I’ve seen his penalty giving I’ll discipline before.

Can’t really highlight or lowlight any of the team, we just looked lost.

We looked uncoached surprise surprise, I preferred come from behind wins to this.

Whare broken arm, well I guess Peachey to centre and Maloney returns, but the promise showed at the halfway point of the competition is fading fast.

My heart remains optimistic, but my head doesn’t see this season ending well… “In Gus we trust” pfffffd

On the bright side it frees up September.

I don’t even know what to say here. On the surface it doesn’t look like we will win another game this season.

There wasn’t a real highlight to discuss, we looked terrible everywhere, the forwards had nothing, the backs had nothing. The one try we did score in the first half was a complete fluke.

I know people on here and in Pantherland thought that Griffins departure would have some effect and we had a real chance of making something of the finals, but the reality has not met expectations. Even with changes that people hailed as the right move have proven to be anything but.

Then sitting through the press conference you hear the interim coach say things like “He was proud of the attitude and effort” and “They done some good things” and “We didn’t get those 50/50 calls”. I swear I almost put a fist through the screen.

He we are, a team sitting in the finals picture all season at one stage were favorites to win the competition this year. We are a week or two away from playing finals footy, and I don’t feel it… nothing. All I feel is the feeling that we blew our chances this year… AGAIN! There is a chance that I am wrong about that, but it doesn’t change the feeling, the PRIDE you should feel being in this position… it’s not there.

I think at least till Friday when we play the Storm, I’m going to tune the Rugby League talk out and keep my exposure to it to a minimum. To say the least, I’m f*****g pissed, and the whole season has been mentally exhausting, to be frank I’ll be happy when it’s over.

This looked set to be a season of success, and it’s ending as a season where for the first time I feel like less of a fan.

no integrity, no unity, no glory.

we have a football side, but we don’t have a team.

I’ll give credit where it’s due: the Warriors were good last night.

If we want to be competitive in the finals we need to put in a much better showing than that. Once again, we looked lost in the attacking 20 (a problem we have had for a few years now), and overall played like an under 20s side.

I’m not looking forward to our game against the Storm next week. Given it is the final home game for a few of their players, I’m expecting a bloodbath on our current form.

its difficult to find the words to describe the sum of our season which is fast coming to an end…on last nights effort we have only 2 games left to play.

I sense a terrible fracture inside our playing group especially the way Cleary went off at players when he put that early kick into the in goal and again RCG standing away from the huddled group when the Warriors scored.

Gould the legend has guided us into turmoil once again and any of you old enough will remember the turmoil this clown left us in once before.

Gould even extended Griffin’s contract only to sack him because he couldn’t coach according to Gould.

What an absolute debacle and insult to loyal Panther fans.

Well the sun come up this morning, oh well sort of as it’s quite overcast in Penrith, and I don’t have to go to work today, so the game last night and the craziness of the past month at our club didn’t end the world. Well maybe just a part of the collective heart of us Panther fans.

The game was terrible. The only saving grace is that, if Gould was harbouring thoughts of going with Ciraldo for '19 and beyond, last night should have removed that as a possibility from even his boof head. A team that looked capable of going deep into Sept only weeks ago, are now playing like 17 Ciraldos, clutching in defence, running as hard as their grandmothers, and kicking the ball at every opportunity.

I’m with you Steve. I was thinking this morning, not even when the Luke Walsh / Adrian Purtell squad was getting towelled up did I feel this way. This current squad HAS the ability to win the comp, Unfortunately if the teacher can’t teach, the student won’t learn…a very sad time for this panther fan particularly when I had a good feeling about the way Hook worked his group. A bad boss will affect a good staff, thanks Gus!!!

Other results have been added for this week from Lottoland, Brookvale.