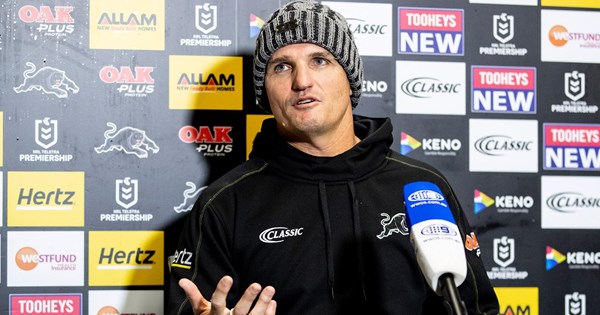 The Panthers’ seven-game winning streak came to an end as they were beaten 30-18 by Canberra Raiders at Panthers Stadium on Sunday. Canberra have reaffirmed their top-four credentials with an emphatic win over Penrith at Panthers Stadium. 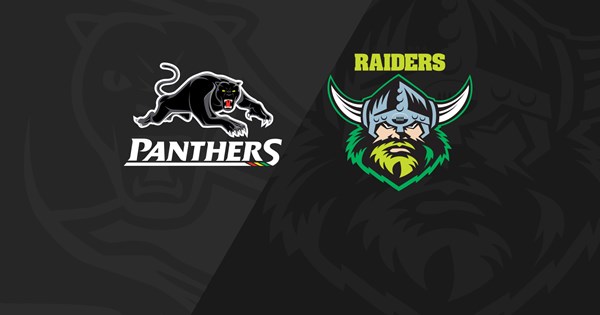 
MAN OF THE MATCH VOTING

Came here to say Ashley Klein is refereeing. God help us all.

with Kikau now out of the squad, there will be a small shuffle in the forwards but the more curious impact i will be watching is how the Maloney news impacts/affects our squad

In many ways a weight will have been lifted from Maloney and his path ahead is clear to him at least, the unknown is how players around him and likely replacements view this as an opportunity to impress or sit back also knowing the way ahead is clear for them

Sunday will show to all of us where the side is at with “attitude” come 6PM on Sunday…they have much to cope with both on and off the field and the challenge of playing an in form team sitting ahead of them is both salivating and with risk.

This is an enormous game on so many levels IMO

One thing about “Jimmy Wins” (self titled) he is a professional. He will not be our problem if we have one trust me!

a glorious day which should provide conditions both teams will enjoy and after the results so far our position on the ladder will not change and the drivers today will be continuing our winning and to test ourselves against a team sitting higher on the ladder.

Raiders on the other hand have the chance to move to 3rd on the ladder.

I would like to hope the refs have no impact on todays game but suspect thats all it is…hope.

its clear for all to see we are getting the better everywhere except on the scoreboard and with the refs and for Klein to “warn” Maloney in questioning decisions…isnt that the role of the captain?

I actually think Klein should be sanctioned for that

That being said the only way we can take Klein out of the game is to outscore the other mob.

Simple…and lets see how we handle the second half.

Its time to let Mansour go

i wouldn’t say that yet but he was ordinary but he wasn’t alone on that side…Martin was quiet as was Naden and Naden didn’t go looking for the ball.
I am more concerned about Cleary…either by design or his focus he has become nothing more than another forward who tackles his heart out and that is not what we need of our 7
Note Cleary (Ivan) any player who has a ball stripped should be fined 10k

But we were dumb, we got dumbed down by the refs and got every bad call but if you cannot score points you are always in trouble and one of our troubles is scoring points.

Maybe we were basking in the sunshine of wins against teams who were not on their game but we got a wake up call today and it wasn’t pretty.

They were too good for us today.

That referee Klein is something else. He needs to rethink
his own attitude towards players. Might have an easier
time of it if he earn’t their respect.

Raiders were on top of their game today, we had a few players who had an off-day.

Good news is we showed grit and determination to the very end.

I thought Edwards and Egan both had very good games, Tamou and JFH as well.

Why o why Naden didn’t kick the ball dead astounds me.

For two weeks in a row Leui ran many more metres sideways than forward. While I do see hints of Thurstan in his game, unless he knows when to inject the razzle dazzle and when to play it straight, I am a little concerned next year post Maloney.

To say I was astounded at some of the refs calls would be an understatement. No way Whare should of got ten in the bin, for what looked to my eyes at least to be an accidental 3 way collision.

Does anyone have any details of what apparently happened at half-time involving Klein, Maloney and I. Cleary?

I do hope nothing comes of that mallee either.

I won’t say that we deserved to win, the Raiders were the better side on the day, but I have question marks over 2 of their tries, and the calls that led to 2 of their other tries:

I might be wrong on these, and they may not have changed the result, but calls like this frustrated our players, making us make further mistakes trying to get back into the game.

Man of the Match voting is now open here.

Round 19 v Raiders MOTM 2019 PantherPride Man of the Match

Your point about Luai does raise many questions about him, he looks like he is talented and has something but from my point of view he is NOT our long term 6 for the future.
This running sideways and his stepping is not only a waste of energy but makes it easier for the defence…not sure if his is capable of running straight and hard or indeed putting a player in a better position away.

I would try something left field this week…as we face Bulldogs.

I would rest Maloney and start Luai at 6 to see how the kids goes and if given the 6 can run straight, be a genuine 6 and use his guile running straight.(if he can)

Its a game i believe we could do both, freshen Maloney and test Luai

But our 6 for next year is interesting…how about we buy the Troboyovic boys and move Edwards to 6.

… so Luai runs sideways, Mansour runs backwards,
Maloney runs off at the mouth and Cleary doesn’t run at all.

We were beaten by a better side. Let’s prepare as a team
for next weeks opponent with as little change at all. Some
minor direction in our tactics sure to see us back in the
winners circle.

I guess I just like wingers who score lots of 4 pointers. JM has only scored once this season he is also prone to errors under the high ball good example yesterday. He is strong though and makes excellent post contact metres…move him to the second row!!

As strange as that sounds you may be onto something there. He generally runs in the middle of the field, so maybe lock could be his natural position?

How about Moses Leota?