The Panthers progressed to the NRL Preliminary Finals by defeating reigning premiers Sydney Roosters 29-28 in a thrilling Qualifying Final at Panthers Stadium on Friday. 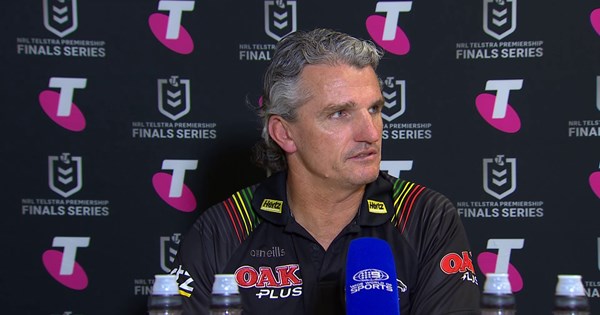 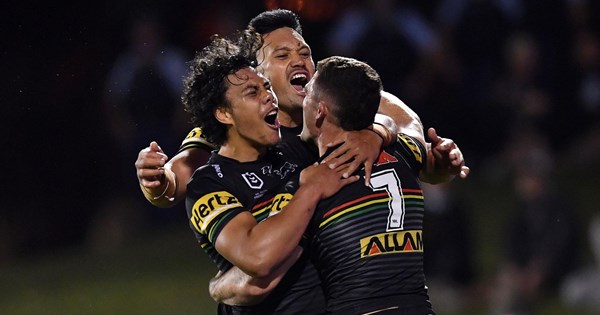 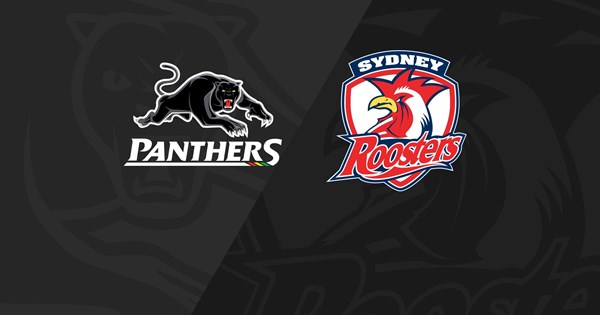 OK usual procedure with Ticketek website for tickets, with a series of messages so no tickets available. But bearing with it, and choosing premium category - we got our seats in Eastern Stand Bay 3, so pretty well diametrically opposite where we normally sit in Bay 27.

I’m going the opposite way Mr Walker, bay 5 to bay 30. The bloke who sits behind my is having a fit, couldn’t get tickets. This is where I’d have preferred us to play at Homebush this time, could have got 3-4 times as many people in.

You’re lucky, Mr Walker. I booked by 10:01, $55 ticket, and am down near the fence. How can all those premium blocks go off inside the 30 secs that mine was allocated? And how is this venue going to give Penrith an advantage? Having a home ground would be an advantage if the two teams playing were located far apart, but Easts Rorters fans can easily get to Penrith and can probably more easily afford the ramped up prices than the western workers.

Managed to snare a treble in Bay 38. I was on the very second the site allowed and only managed to get seats on the far edges.

Not super pleased with where I am seated, but at least I’ll be there.

Stupid me forgot to set a reminder alarm!

First home final I will ever miss out on.

Good luck to you all, I’ll be watching from home

I agree that kicking the goals is important. If the tiges could have kicked a goal we would be playing raiders or slimies this week!
That said, the wind conditions were difficult on Sat, with the wind swirling in the stadium. When the dogs kicked that 40/20 it appeared the wind was behind them, but other kicks from them in the 1st half were knocked down by the wind. Their kick-offs were quite short & were blowing back on themselves. Of course we only kicked -off once (to start 2nd half). Always a good sign when you only kick-off once in a game

I am sure NC will be practicing a bit this week & I’m backing him in.

OK, team named and it’s our best 17. Spencer is unlucky to miss out, but he will be a regular next year.

If we play to our best, as we have done pretty much for 20 rounds, we should be able to beat the roosters & progress to week 3.

I honestly dare to dream, I can’t see another team beating us on the field, only thing is can we keep our heads in order so we don’t beat ourselves?

What I saw on Saturday was Cleary wasn’t putting much effort in his goal kicking, resting his legs so to speak.

I hope we continue with our punishing defense in the first 30 minutes, also take the gift penalty goals if they present themselves, and don’t shy away from taking an early field goal.

Apart from that, keep on keeping on!

The only way we will beat this group is by controlling the game in their end. Making them work defensively particularly early on. If we are in field goal range we do not give them 7 tackles, we either play for the try, the ball back or simply pin them on their line then defend like no tomorrow with no freebies…although that is the Ref’s discretion so that is a worry if we are on top early.

No field goals in the first 38 minutes please…

Finally we at the starting point, all the preliminaries are done with and what a game to begin the series playing last years Premiers and (still) most pundits favourites for the title in the Roosters.

We should make no mistake, this will be a real test at every level for every player and we will have players who will be challenged

I think they will attack To’ and Mansour with the high ball and run at Mansour particularly causing him to make poor defensive choices. They will also run their big boppers at Luai rather than Cleary

For us this reminds me much of the last eels game where me bashed their forwards and nullified what the backs could do and we will need to do this again and the first forward we have to nullify is JWH in much the same was we shut down Gillard. They see JWH as a real hit man and closing him out will be key along with Friend (if he plays). These are their 2 key forwards and if they get a roll on, it opens it up for the Keary/Tedesco threat

Thats them…we of course have to stick to our processes and believe in this. We will face bad calls for sure but we need to remain on focus.

With our home crowd we should get them and i hope by a clear margin and more importantly no injuries or dubious suspension/reports out of the game.

Panthers but will be closer than we think.

A very big congrats and thank you to all supporters who got tickets and will turn up for the game…well done!

Agreed, it is a given that the Rorters will bomb to the wings, so we have to absolutely minimise their possession in our half. In the olden days (2019 and earlier) we gave away too much with dumb penalties, poor ball control and a complete unawareness of potential short kick-offs or line dropouts, but this year has seen a massive improvement (I think). Penrith needs to maintain that sort of discipline.

6-agains are certain to go against us, and it is irritating to not really know why each was awarded, since they happen so quickly. We can but hope.

I must not understand how the seat allocation has been determined, because I don’t see why the crowd will necessarily be overwhelmingly pro-Panthers. Surely the Rorters supporters had as much chance as us to buy tickets, and probably more financial capacity to buy the more expensive ones. I reckon that the only thing in our favour is the deep-seated fear in Rorters supporters of catching cooties from the unwashed west inhabitants; they head out past the CBD at their own risk. Or are they just like Manly, whose supporters won’t cross the harbour.

Late Changes to the Roosters Squad. Sonny Bill Williams will not play due to a flareup of a neck complaint. Nat Butcher will his replacement. Head Coach Trent Robinson has updated his squad to 19 men ahead of Friday's Qualifying Final against the Penrith Panthers.

Panthers finalised their squad with Matt Burton and Dean Whare omitted from this weeks team.

Panthers coach Ivan Cleary reduces his squad to face Sydney Roosters in a Qualifying Final at Panthers Stadium on Friday.

$BW has been ordinary since his “triumphant” return. The only thing they will lose with him out is big match experience.

With Burton and Whare left out, it’s obviously Cleary has 100% confidence in To’o’s fitness.

If anything happens to To’o, May to Centre, Naden to Wing. Bases covered.