The Panthers broke their club record winning streak, as they defeated the Warriors 18-12 in a historic ninth-straight victory. 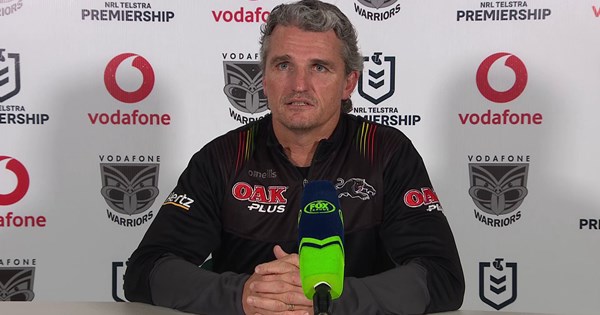 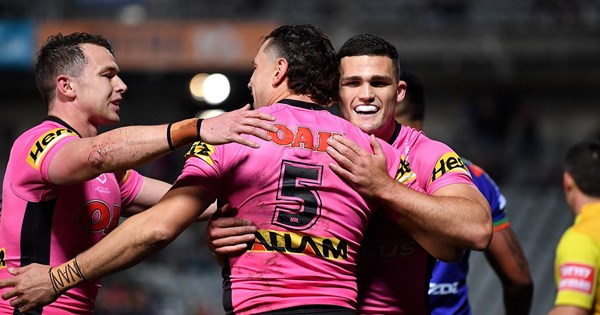 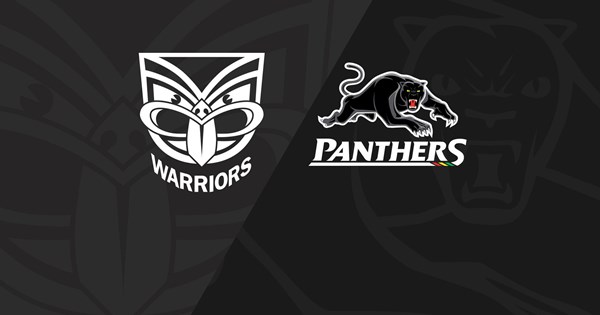 Just a few hours before kick-off now & hoping for another good effort across the park. I trust we see no more managing of our opposition by the officials

. Interesting that the same ref did the game last night where one team led 24-0 again, and then didn’t score any more points.

Expect that the warriors will come out hard and hope we can match them and then take control of the game. One of their best players in recent months is suspended, but not too sure what to expect from them.

Hoping for the 2 points & no serious injuries.

This will be a victory by some margin, expecting approx. 30 point win or thereabouts.

can be hard yakka when the opposition have got nothing to lose.

We stick to our guns and play our game out, we can/will prevail.
I too, am hoping for no injuries with a smattering of classic attacking footy.
C’mon Panthers !

Well the warriors certainly gave it their all and this was one hard hit out.

9 wins in a row is something to take pride in, learn the lessons from this game and move on.

Edwards had a great game, in everything in both defense and attack.

Cleary seemed to loose the plot a bit in the last ten not taking a field goal.

The second half was played in atrocious rain conditions, yet very few errors.

Mansour a try assist with a grubber! Well he may not know how to pass but goes to show maybe you can teach an old dog new tricks.

Not the flashiest game or high scoring, but a good hard hitout nonetheless.

untidy performance makes you wonder what effect Naden’s incident had on proceedings. Just the same 9 straight is a massive achievement. Good to see Dylan Edwards back. Let’s now concentrate on our next assignment.

Good performance in the conditions, outstanding completion rate. In modern NRL there are not just ‘turn up & win’ weeks - each team is capable of making you work very hard for victory. The fact we have now played 14 games & only lost won is a great achievement, right up with our best seasons, from teams we look back as our best evers.

All players made a contribution, but again Api & NC were instrumental in the win - they are a class above their opponents at this time, and the whole team is benefiting.

Was very disappointed in the abuse of Nado, including apparently by some dickheads in Panthers colours??? Name & shame & ban these pricks. I have never met Brent, but I just love the way he enjoys his footy and how he celebrates his teammates success.

My fear of our season is being dudded by refereeing/bunker decisions. Whilst overall the ref last night is clearly a huge stepup from Sutton & Cummins, there are still decisions being made that may cost us at an important time. The penalty against Martin in that kick contest was ridiculous - he had eyes for the ball only and ran to get under it, and made contact with a defender who was also going for the ball. Fair contest & yet a penalty came???

Great feeling to sit atop the comp, made even better by the eels losing. Apparently the $torm will not lose the 2 points for extra player on the field, as has happened each time previously - go figure. Just waiting for the NRL to find a way to have broncos finish in top 4 and host a home final!

A close one. I had expected this. A lot of teams are using their matches against the Panthers as a “test of their metal”, and having a real good crack. It became clear as the rain got heavier and heavier that this match was going to become a grind.

I think both teams played well, probably one of the best performances the Warrior have come up with this season. They were tough in defence and made that Panthers work that little bit harder.

As already said by other, considering the conditions on the ground it was a good result. Onward to next week.

Can anyone explain the obstruction call on Kikau’s try? The replays didn’t seem to pick it up. Some commentary about Cleary, however as he had the ball and made the offload the call couldn’t be against him?

Cleary ran behind another player as he came across field. When I say behind it was maybe 10m behind & it made zero difference - no one was obstructed from getting to Cleary, but the refs have come up with an interpretation to take the need for judgement out of it for their pee brains. The ref saw it and was going to call it straight away but then relied on the bunker copout when he saw that Billy was going to go close to scoring.
Was interesting to see Billy tackled by defender when the ball was still only halfway to him from Cleary. Billy still caught the ball and made the more than 10m to place the ball down for the ’ try’.

Lots of insightful commentary above. Thanks for that. I think that these sort of wins are beneficial in many ways, and will stand us in good stead as the season progresses. One think that continues to bother me is Penrith’s apparent inability to understand that the opposition might try a short kick (either from the goal line or at the half way). Tyrone May fumbled one, negating all our advantage in forcing the dropout. Then later Martin just managed to grab the ball; why would you put one of the shortest players there; that seems to be asking for trouble. Wouldn’t you put your best jumpers there just in case?
Also, for the second NZ try, I thought that Crichton had his man covered; hence Mansour didn’t need to come in. I would have thought that they would have had a better understanding than that.

I didn’t watch the game until last night, had it recorded. I read all of the above comments yesterday and found myself wanting to find an excuse for the teams performance given the scoreline.

What I will say is, the Warriors would have beat a lot of teams in the 8 with that effort, they did not stop even after we smashed them early with defense. We were 70% possession in the first half with 20 odd completed sets, 33 minutes before our first error. That is a HUGE defensive effort by them.

What I did notice however was the 6 again calls, Penrith being on the 1st tackle for almost all of them, however the Warriors, particularly the 2nd half got theirs on tackles 3 and 4. One 6 again call (4th tackle) was on JFH, who never reacts to ref decisions but on this occasion (IMO totally valid) he turned to the ref and let fly but still got on with his job.

IC is 100% right, these referees are managing sides back into the contest, whether they are aware of it or not, it is happening.

In those conditions, with that defensive effort in the first half, Penrith should have gone on with it. Yes we made some fundamental errors, yes I believe some of our group in the 2nd half were not at their best, Naden was not seen…understandable to a degree but if he was affected should have been an interchange, but that does not detract from the fact the ref decisions were significantly poignant and certainly affected the Penrith momentum.

End result - lesson learned, sides will take full advantage of the “get up for the game” mentality and in turn if we appear to be cruising, the decision making will be against us…We MUST deal with that going forward.

I don’t want this to sound like a conspiracy theory, but I feel the “6 again” rule is a easy way of managing a side back into a game.

It happens quickly, no time to process or review it. I have sat watching many games this year wondering why a “6 again” was awarded. It’s technically not a penalty so it can’t be contested via Captains Challenge and doesn’t go down as a penalty.

But it does give clear advantage to the attacking team, and how you use it will vary that benefit. It is the perfectly engineered tool to manage a game to “balance” the scoreline.

100% Steve - I think I am fairly knowledgeable and could (without prejudice) understand almost every decision being made previously.

NOW - we are akin to AFL - It is purely the ref prerogative to call these on the fly as they see fit, their is numerous possibilities to make the call, and like you said, go unquestioned because their is no opportunity to use the Captain’s challenge.

It is only a matter of time before the scumbags of the Earth (Bikies / dodgy bookmakers) take to our refs and corrupt our great game. How can these decisions be questioned, thus how easy will it be to “affect” the result…….NOT GOOD !

The Six-Agains remind me of the old penalty count disputation. Team A get a whole bunch of penalties, helping them to a handy lead. Towards the end of the match, Team B is awarded some penalties, some on the 1st or 2nd tackle (hence of little use), but too late to get back into the match. But it looks better on the refs stats. It’s not difficult to become cynical, and these 6-Agains fit the bill perfectly. Just saying.

Question - wasn’t one of the blokes evicted from the match last week wearing a Penrith jersey. Surely he wouldn’t have been bad-mouthing Naden?

There was an awful lot to take out of this game
Firstly Warriors were in the game and had their best game this year and on that form IF ( a very big IF) they make the 8 will give plenty of cheek
On us, we were solid and had trouble scoring against Warriors which again is credit to them but also is a concern for us.
So much so its the second week in a row we have NOT scored a try in the second half and this has me more concerned than anything.
Cronulla on Friday will have plenty of reasons to turn up and have a dig, least being the thrashing we gave them only a few weeks ago and this result will be all the motivation they need to turn up ready and when you add we are leading the comp, there will be plenty in this game
Personally on the “managing” comment by Cleary and some on here, i find unfortunate and a distraction.
If he is trying to build a siege mentality at the club, not sure if making a widespread accusation is effective or even worth the effort.
Our boys are doing just fine despite any dubious or confusing calls and i think Cleary SNR should focus on coaching the team for us to control the outcomes.